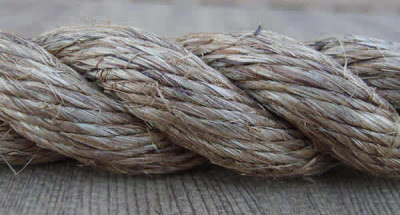 Rope Mending in the 21st Century

Milton the rope mender had no work. It was the twenty first century and repairing rope was a thing of the past. It cost about the same for a man to replace the rope altogether than mend portions of it. He was not as fortunate as some of the other men of his trade who were hired by the government to repair rope, mostly navy based. But like them, it was all he knew. His father was a rope mender, and his father’s father was a rope mender, though both deceased. If he knew his genealogy well enough, he might trace back his ancestors to being rope makers.

Now, for Milton, it was not just a mere job but an art form and a contribution to society. He looked at rope as the final product made up of simple strands that gave it complexity much like quarks give protons or protons give atoms and so on. He was creating and sculpting something durable that would serve mankind for years to come. But given the quality of today and the synthetic materials that were cheaply mass-produced, his work was impractical. He was a tradesman with no trade, and artist with no art form.

Milton had no family. His only obligations were the rent and food. Both were difficult to manage without wages, so he put his nimble mind to work. He had several different grades of rope left to him by his father: thin and black, thick and white, and hemp.

His imagination directed his nimble fingers in the task of weaving and twisting the different strands of rope together. Bracelets. He made as many as the night and early morning and his body would allow, finally falling asleep atop a pile of rope ringlets.

When he woke at noon the next day, he put most of the bracelets he made into a large, cardboard box. Struggling to carry the flimsy box, Milton walked to the center of town near the bars and the small stage. He saw the Wiccan women in front of the bar selling her scented oils, charms, and jewelry and continued a little farther so not to intrude upon her territory. If she could sell what she made, so could he.

People passed Milton on the street and only few bought his bracelets. Maybe he charged too much. Seven dollars. Maybe he should say they are earth friendly. A young man with a beard and old clothes asked how much for a bracelet. Five dollars. The man asked for two and Milton said they were earth friendly.

“I have some earth friendly friends, man who would like what you’re selling. Bring yourself and your box to the field next to the old bridge. We’re having a party tonight for the meteor shower. You’ll probably sell them all.” The man said thanks and goodbye.

~
Milton took all the bracelets and placed them in the box. Heavier than he thought. He walked clumsily through town continually shuffling the box to get a firm grip. Cars blared loud music. Yellow. Red. Milton crossed the street. The car did not stop. Little rope ringlets scattered on the street and Milton’s body was flung thirty feet. No one could mend Milton, at least not in the twenty first century.
Posted by Bob at 9:11 AM

Bob
I write short stories and essays. I have published over one hundred stories, essays, and flash fictions or nonfictions in magazines or anthologies, as well as a novel, Jack's Universe, and a collection of stories, Private Acts. I grew up in a military family, so I'm not from anywhere in particular except probably Akron, where I've lived for forty years. Before I came here, I never lived anywhere longer than three years.